For the fourth time in the last eight years the hierarchs of the Ukrainian Catholic and Ukrainian Orthodox Churches in North America have met in a brotherly “Encounter” to discuss the relationship between the two Churches and the common concerns they share in shepherding the faithful entrusted to their spiritual care.  The meeting took place in Clearwater, Florida on 12-13 March following separate meetings of the two groups of hierarchs just preceding the Encounter.

Of primary concern to the hierarchs was the present state of ecclesiastical life in Ukraine in all jurisdictions and the fate of the Churches under the present unfortunate political divisions within the Ukrainian government and in Ukrainian society as a whole.  In the minds of all the hierarchs present at the Encounter, Christian witness in Ukraine is not only endangered by the disarray in government and societal life, but damage is actually being done to the efforts toward ecclesiastical unity and the Christian service to those in Ukrainian society who are most in need.

The consensus of opinion of the Encounter participants, having heard from the Orthodox hierarchs about the recent visit of Ecumenical Patriarch Bartholomew I to Kyiv, was that it was a positive event, which can result in consequences beneficial to all Christianity in Ukraine.  The Catholic hierarchs shared their experiences in relationship to their brother hierarchs in Ukraine, in particular information about the progress of construction and program development at the Ukrainian Greek Catholic Sobor in Kyiv.  The hierarchs are of one mind in the belief that the Church must reclaim its place as the moral conscience of the Ukrainian nation – a role denied to the hierarchs – or abandoned by some – during the long, dark night of communist subjugation.  The Encounter participants agreed to explore the ways in which both the Churches of Constantinople and Rome can be encouraged to promote the stabilization and independence of ecclesiastical life in Ukraine, particularly in light of possible challenges to that independence that may result from political changes in the government and in the church of neighboring Russia.

Lengthy discussion was devoted to a thorough examination of Church life in both the Orthodox and Catholic Churches in North America.  The hierarchs were greatly concerned about declining membership in so many parishes and the conditions, which seem to exacerbate this critical problem.  The hierarchs will continue to discuss on a regular basis in upcoming meetings new possibilities for jointly conducting youth ministry, programs related to clergy education and welfare, adult education.  They hope to share in a common outreach to their faithful in confronting the effects of the secularization of society on the life of both Churches and the threats to Christian life, which abound in the moral, ethical and social issues facing those societies and, indeed, Ukrainian community life in both Canada and the United States.  The hierarchs concluded that there is an enormous need to devote much more prayer and time contemplating and focusing upon the manner in which the Church gives witness in an ever-changing society.

The Encounter participants repeatedly stressed that there is much more that unites, rather than divides us in fulfilling our responsibilities before God.  They are convinced that the Holy Spirit is at work in their gatherings and that there is a need to closely examine the paths to a deeper ecclesiastical relationship between them, benefitting all the faithful entrusted to their care.  To this end, they envision their meetings evolving into a permanent Eastern Christian Dialogue, which will enable such an examination and even provide a focus for the more general and long-established Orthodox-Catholic Dialogue.

The time spent together during this Encounter was deeply valued by all the hierarchal participants, who departed with a new sense of purpose and relationship in the Name of the Lord. 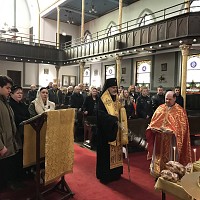